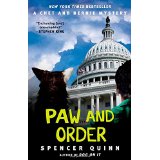 Description: The back cover tells us the book is narrated by Chet, the canine partner of Bernie, an Arizona private detective. The team travels to Washington DC to visit Bernie's girlfriend, a reporter working on a big story she won't divulge. A source gets himself killed, and Bernie is arrested. After he's released, he and Chet work to solve the mystery.

Plot: The book is a bit more gritty than my usual “light, fun read,” altho Chet is a really funny narrator. The storyline is sufficiently complicated to make for an interesting read. It wasn't really a who-done-it, because Chet gives the “who” away with something he sees and reports but doesn't know why it's important at the time. The process of Bernie figuring out the “who” as well as the “why” was interesting. The end included a somewhat-high-tension [altho not as scary as many books I read] experience and a satisfying twist. The main problem I had with the plot is that the triggering incident [where the story question began], didn't happen until the end of chapter 4. If Chet wasn't such a funny narrator, I may not have been sufficiently interested to read through the end of chapter 4.

Characterization: The characters are well-developed. Chet is really funny in what he reports as important. He notices all the smells and sounds he encounters, and gives the reader hints of things that Bernie doesn't know about because he doesn't have a dog's keen sense of smell or hearing. I wanted Bernie and Chet to succeed, altho the tension and danger level wasn't as high as I expected from this grittier story.

Setting: Washington DC. The descriptions were very good, I was able to picture every scene without it being over-described.

Other: The narrator, Jim Frangione, took a while to get used to. I heard sharp intakes of breath frequently. In the beginning few chapters, his style kind of grated on me, but as I got used to it, it did get better.

Overall: started too slowly, but the humor carried it to where it really started. I would read more by this author.