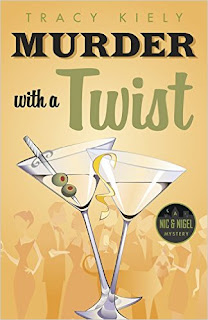 Description: The back cover tells us that Nic, the protagonist, is a former detective. Together with her husband Nigel and their newly adopted bullmastiff Skippy, Nic investigates the disappearance of Nigel's cousin's husband. I love the line on the back cover - “despite the fact that it would be better for everyone if he just stayed lost.” This exactly sums up the character of the man they're looking for, and asks the question of why does the family want to find him in the first place.

Plot: The book is a light, fun read and moves quickly, with short chapters [some only two pages, which I thought odd] and lots of humor. The storyline is sufficiently complicated to make for an interesting read, and includes plenty of suspects and motives. The end includes a satisfying twist, and although I managed to figure out most of it, the final resolution did keep me guessing until the end. The one negative I can say, is that at no time did I worry that Nic wouldn't solve the puzzle, or that her physical or emotional safety was at issue. That reduced the tension level quite a bit.

Characterization: The characters are reasonably well-developed, although not as much as they could have been. I wanted Nic to succeed, but I wasn't as invested in her success as I wanted to be, possibly because of the reduced tensions level, see plot above. I also wish the dog had been given a larger role.  A bullmastiff is a 100+ pound dog, and it would have been fun to see him with more of a role.

Setting: New York City. The descriptions were very good, I was able to picture every scene without it being over-described.

Other: The line on the back cover – Includes cocktail recipes – is entirely false. There were no cocktail recipes included. The last name of the main character is Martini, the characters do some drinking, and a few scenes are set in a bar, but that's as close as it came.

Posted by Dena Pawling at 6:16 AM No comments: