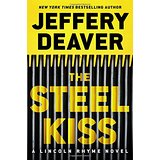 Description: This is book #13 in the Lincoln Rhyme series.  Rhyme is a quadriplegic forensic criminalist.  He works with Amelia Sachs, a NYPD detective.  In this book, he is retired and working on a civil case.  He discovers his civil case is related to the criminal case currently being investigated by Sachs.

Plot:  An escalator malfunctions, causing a death.  Rhyme works with the attorney hired by the victim's family, to build a case against the escalator manufacturer and others.  Meanwhile, Sachs is trying to discover the identity of a brilliant serial killer who uses common everyday objects as murder weapons.  Rhyme and Sachs learn the same person is responsible for both cases.  Quite a few plot twists. Several sub-plots, at least one of which really didn't add much to the story.

Characterization: All the characters are reasonably well-developed, altho this is the 13th book in the series so they aren't as fully developed as they could have been.  Most readers will know these characters from previous books.

Other:  This author is really good at taking current events and headlines and turning them into excellent stories.  This book was narrated by Edoardo Ballerini and he did an excellent job, definitely added to the characterization and the story.

Overall:  Good story.  I thought one of the plot twists was a bit too unrealistic and seemed like a cheat.  If the author had given at least one well-concealed hint of this possibility earlier in the story, it wouldn't have come over so much as a cheat.  Also, it seemed there was one too many sub-plots.


Posted by Dena Pawling at 6:00 AM No comments: 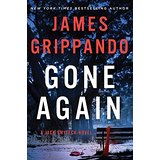 Description: This is book #12 in the Jack Swyteck series.  Jack is a criminal defense attorney in Miami Florida.  In this book, he is working with the Freedom Institute, representing a death row inmate who insists he is not guilty of killing the victim.

Plot:  Sashi Burgette, the 17yo victim, disappears on her way to school.  Her body is never found.  The next day, Dylan Reeves is found with her underwear in his car.  He is convicted and sentenced to death.  With his execution only days away, Sashi's mother contacts Jack Swyteck and tells him “Sashi called me.”  The book details Jack's attempts at getting Dylan off death row.

Characterization: Dylan Reeves is very well developed and realistic.  The victim's parents and siblings are well done.  Jack isn't quite as well done as the others, but I was still able to get a good feel for who he was as a person.  One thing that was really well done, is the “bad people” [term used to avoid spoilers] had reasonable and understandable motivations for their actions, they were not stereotypes.  The resolution of the story was very believable, and the reader was left with the question of whether sometimes a killer really may have been justified.

Setting:  Miami and other locations in Florida.  Nicely described.

Other:  This story reminded me so much of my days as a law clerk in the county Public Defender's office.  The dedication of the defense attorney and his team is well-done, even defending people who most of society wouldn't care about.  Dylan Reeves isn't a saint by any means, but Jack treated him with respect, and fought for the proposition that if he didn't kill Sashi, the death penalty would not be appropriate.  The book was narrated by Jonathan Davis and his voice was well-suited to the characters and the tone.

Overall:  An excellent story.  Realistic.  Gave the reader something to think about – murder is sometimes not easily categorized, and people who do bad things are real people and not just “bad”.  I really liked the way it left the question open – is a killing sometimes justified? 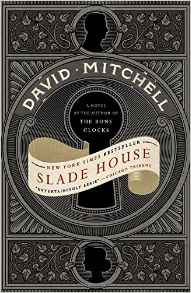 Description:  This is a haunted house story spanning five decades.  Every nine years, in an alley near a British working-class pub, a narrow iron door appears in a brick wall.  A stranger emerges through the door and invites a carefully selected passerby through the door and into Slade House.  Once inside, no one ever leaves.

Plot:  The book tells the story of five such nine-year appearances of the iron door, the five people who enter through the door and into Slade House, and what happens to them.  With each person, the reader learns more about the house, the occupants, and the reason for the appearance of the door.  By the fifth person, it was getting a little tedious, so I guess it ended right where it should have.

Characterization: The occupants of the house, and each of the five persons who subsequently enter the house through the iron door, are reasonably developed and distinct.  The occupants are anti-heroes, the reader doesn't necessarily like them too much, but does end up rooting for them [at least I did].  Near the end I wasn't sure whether I wanted them to succeed or fail.

Other:  This isn't a genre I usually read, but I found the book entertaining.  It's supposed to be a side excursion in the same world as this author's book The Bone Clocks.  I haven't read that book, but I was still able to enjoy this story.

Overall:  A very good story for those who enjoy supernatural and/or haunted house stories, and horror stories like Stephen King writes.  This book was read by Thomas Judd and Tania Rodrigues and I thought the voices were perfect.

THE FINE ART OF MURDER by Emily Barnes [Book recommendation] 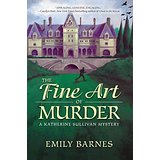 Description: Widowed police chief Katherine Sullivan turned in her badge and is now pursuing an interest in art in Taos New Mexico. She returns temporarily to her hometown in Minnesota to support her recently-divorced daughter and her two grandchildren. While there, she is drawn in to a murder investigation.

Plot: While back in Minnesota, Sullivan visits an art museum. The next day, the employee she spoke with at the museum is found murdered. Prior to retirement, she was the chief of police, and certain current officers ask her to help with the investigation. She teams up with another retired officer, butts heads with the current chief, and solves the mystery.

Characterization: Katherine Sullivan is well developed and very grandmotherly to her daughter and two grandchildren. However, she does NOT strike me as a very competent police officer. She shuns back-up and puts herself into potentially dangerous situations without much concern for her own safety. I don't see a real former police officer doing that. Her grandchildren were a teen boy with Asperger Syndrome [I have one of those, the characterization was well-done] and a girl who is portrayed as a typical cell-phone-dependent teen, although I don't think she protested nearly as much as she should have, when subjected to having her phone confiscated. The other retired officer was nicely characterized.

Other: The mystery was good, and I enjoyed reading a main character who is older than the norm, but it's hard to get past the notion that Sullivan acted so far outside what I would think a typical police officer would do, endangering her safety etc. Just because a person retires, I'm sure all the previous training is not forgotten or discarded.

Overall: This is a nice cozy mystery, if you can get past the character problem. The book is narrated by Carrington MacDuffie and she did a great job. 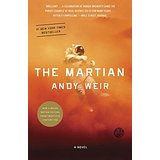 Book obtained from: Library New Books shelf, audio book
This review is of the book.  I have not seen the movie.

Description: Mark Watney, the junior member of a Mars mission, is injured in a severe dust storm.  The other astronauts believe he died, so they abandon the mission, retreat to their ship, and set out to return to Earth.  Except Watney didn't die.  He has to figure out how to survive until NASA can send another ship to rescue him.

Plot:  More than half of the book is how Watney survives on Mars.  The author is a real engineer/techno-geek and these descriptions were VERY detailed [with exact numbers] and sometimes tedious.  At first I tried to follow along with the details, but after a while I gave up and just listened to the story.  Some chapters are NASA folks figuring out what happened and how to retrieve him.  Other chapters are Watney's crew members learning he didn't die and what they do to retrieve him.

Characterization: Watney isn't as well developed as I would have liked.  He rarely, if ever, muses on memories from his past, friends he missed, things like that.  He only occasionally thinks about his parents, etc.  The story would have been that much better if there were instances of these memories.  He is, however, hysterically sarcastic and definitely someone I'd like to be stranded with somewhere, if I ever have that unfortunate circumstance.  Most of the secondary characters were at least somewhat developed, with their own distinct personalities.  I liked the fact the author included a lot of diversity in his character choices.

Setting: Mars.  Some scenes at NASA facilities and inside the ship containing Watney's crew members.  Descriptions were very good.

Other:  There were a few scenes, usually related to count-downs of rescue missions, where the author ramped up the suspense very well.  I also laughed quite a few times during this book, I would say at least once every half-hour.  Watney's sarcasm is really funny.

Overall:  An excellent story.  This author really knows his science, altho it did get tedious at times.  I actually tried to read this in book form, but put the book aside after about 50 pages because I couldn't get through the details.  Then I tried the audio book.  Listening on audio was much better.