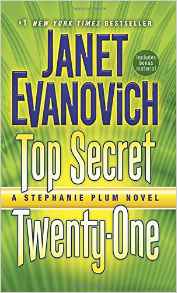 
Description: Stephanie Plum, the protagonist, is an inept but very lucky bounty-hunter. She also moonlights for her friend Ranger, a security expert and also bounty-hunter. In this story, she's looking for a used car dealer who skipped out on his bail.

Plot: Stephanie is looking for a used car dealer. Despite 21 “numbered” books and several “between-the-numbers” books, Stephanie really hasn't learned much since she started working as a bounty hunter. She's still inept and extremely lucky. But she and her friends also hysterically funny. Additionally, I am always amazed that Evanovich can weave together so many apparently unrelated storylines and have them related by the end of the book.

Characterization: The characters are reasonably well developed and had their own personalities, altho they are mostly the same characters from previous stories. I've read most of the Plum books, and I've read some reviews which state the characterization isn't as well-developed in this book as in previous books. So I guess it's best to read the books in order.

Setting: Trenton, New Jersey. The descriptions were good, I was able to picture every scene without it being over-described.

Other: Evanovich has received many reviews indicating that a certain percentage of readers are getting bored with the stories because Stephanie doesn't learn much about her job, and still hasn't made up her mind which, if either, of her boyfriends she'll choose. I suppose there is a bit of truth to that harsh criticism, but I enjoy her ineptitude and her inability to decide. I guess it hasn't gotten old for me yet.

Posted by Dena Pawling at 6:44 AM No comments:

ME AND EARL AND THE DYING GIRL - Jesse Andrews [Book recommendation] 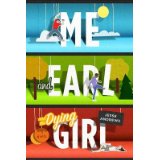 Description: Greg, the protagonist, and his friend Earl, high school seniors, like to make films. Another friend, Rachel, has leukemia.

Plot: Greg's mother “makes” him be friends with Rachel, a girl who has leukemia. Greg and Earl make a film for Rachel. Despite the sad subject matter, the book is actually a lighter read and funny.

Characterization: The characters are well developed, had their own distinct personalities, and sound exactly like high school students. Greg is a loner with self-esteem issues. Earl is a “black kid from a troubled home” but he is a good friend and likable. Rachel is not as developed as the boys but the book really isn't about her, it's about Greg and to some extent Earl.

Setting: A high school in Pittsburgh Pennsylvania. The descriptions were good, I was able to picture every scene without it being over-described.

Other: I read the first release of this book [the one with the cover above] and NOT the revised/re-issued book. I have not seen the movie, this is a review of the book only.

Overall: I'm not someone who enjoys “tear-jerker” stories. I was pleasantly surprised by this book. It's a good story, on the lighter side of the serious subject matter. Funny. Made me laugh quite a few times. Greg, the narrator, often speaks directly to the reader with lines like “this book sucks” and “I don't know why I'm even writing this.” I would read more by this author.

Posted by Dena Pawling at 5:56 AM No comments:

THE GIRL WITH THE DACHSHUND TATTOO - Sparkle Abbey [Book recommendation] 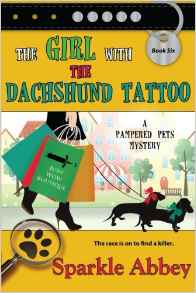 Description: Mel, the protagonist, owns a doggie boutique shop, and she operates a booth at a regional dachshund race called the Dachshund Dash. Before the big race starts, one of the dog owners is found dead and Mel's assistant is the prime suspect. Mel investigates the killing to clear her assistant's name.

Plot: Mel tries to clear her assistant's name by interviewing dog owners, race officials, and other folks. Her fiance is an FBI agent and he's at the race, too, but he won't tell her why. Mel uncovers cheating, doping, gambling, and other activities at the doggie racetrack.

Characterization: The characters are reasonably well developed and had their own personalities. Betty, Mel's assistant, is pretty wild and crazy and fun to read about.

Setting: Beach town of Laguna Beach California, which isn't too far from where I live. The descriptions were good, I was able to picture every scene without it being over-described.

Other: This is the sixth book in the series. The books alternate between Mel and her cousin Caro as the protagonist. I haven't read any other books in the series, but I was able to follow along and understand the story.

Overall: A good, light mystery. Funny. I would read more by this author.

Posted by Dena Pawling at 6:41 AM No comments: 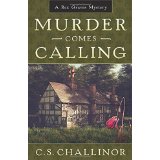 Description: Four murders take place in a secluded English village. All four victims were selling their houses at the time of their deaths, so at first the police suspect the house [real estate] agent. Scottish barrister Rex Graves is called on by an old friend to help solve the puzzle.

Plot: This is a murder mystery set in a small community in England. Solving the mystery requires the MC to delve into the happenings of the past. It's compared to Agatha Christie, and that comparison is mostly accurate, altho this story has fewer characters to keep track of than a typical Christie book, which made it easier to follow along.

Characterization: The characters are reasonably well-developed. The protagonist is a Scottish barrister [attorney] visiting an old friend in a small community in England. The old friend, a physician/pathologist, gets himself mixed up in the murders by finding the bodies.

Setting: Small community in England, late November through late December, so late fall / early winter. The descriptions were good, I was able to picture every scene without it being over-described.

Other: This is a small paperback of 200 pages, so it was a quick read.

Overall: A good English cozy mystery. I would read more by this author.

Posted by Dena Pawling at 6:02 AM No comments: