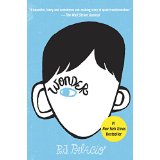 Description: This is a middle grade book about August Pullman, a kid with a facial difference who has been homeschooled because of all the medical procedures he's had to endure. But now he is starting fifth grade in a private school, and all he wants is to be treated like a normal kid.

Plot: The story tracks August from the summer before he starts fifth grade, through his first year in a regular school environment. He endures stares and taunts, and makes a few friends.

Characterization: The book is mostly written in August's first person POV, but it does include several other first person narrators, including his older sister and several of his friends. All of the narrators are true to life, and portray the various practical and emotional aspects of living with, or having a brother/friend living with, such a noticeable difference.

Setting: New York City. The descriptions were good, somewhat minimal at times, but I was able to picture every scene.

Other: I know a kid like August, he's 17 now. I don't pretend to know what his life's been like, but I pictured him while I was reading this book and lots of things made sense. Also, middle school in my area is usually grades 7-8, or sometimes 6-8. I did find it odd that middle school in this book started in grade 5.

Overall: This book is amazing. The author is able to portray the conflicting feelings of the characters, and simultaneously making the reader laugh and cry. The only negative I can find, is that there wasn't really an overall story goal or question, beyond “will August make it through his fifth grade year, and will it be overall a positive or negative experience.”

Posted by Dena Pawling at 5:37 AM No comments:

THE GOOD, THE BAD, AND THE EMUS - Donna Andrews [Book recommendation] 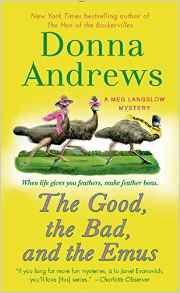 Description: Meg Langslow, the protagonist, helps a private investigator, Stanley, find her long lost grandmother, and helps her grandfather coordinate a round-up of emus escaped from an abandoned farm.

Plot: Meg and Stanley learn the long lost grandmother is recently deceased, but promise a cousin to find the grandmother's killer. While searching for the killer, Meg helps her grandfather organize a large group to round up the feral emus and transport them to a sanctuary.

Characterization: The characters are reasonably well developed. Meg's grandfather is a hoot. I'm a bit disappointed in Meg's husband Michael, who seems to be relevant to the story only as a babysitter for the kids.

Setting: A small town in Virginia. The descriptions were good altho sometimes a tad over-described, I was able to picture every scene.

Other: Sometimes I'm completely surprised by the whodunnit in a mystery, altho most of the time I can figure it out about 2/3 or 3/4 of the way thru the book. For this story, I had it figured out before the half-way point. However, this was NOT disappointing for this story. It was actually kind of exciting that I “got it right.”

Overall: The books in this series are sometimes a little slow paced, but not so slow that I would stop reading.

Posted by Dena Pawling at 5:39 AM No comments: 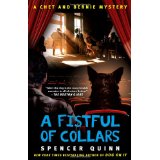 
Description: Bernie, the protagonist, is a private investigator. He and his dog Chet are hired to “babysit” an actor with a drug problem and a big head while he's filming a movie.

Plot: Chet and Bernie investigate a total of three deaths while attempting to keep a bad-boy actor out of trouble. One of the deaths was quite a bit in the past, and all of the deaths appear somehow related to the actor.

Characterization: The characters are well developed. Chet is a funny narrator. Bernie is often clueless altho Chet reports him as “always the smartest human in the room.” Supporting characters have their own personalities and are well-written. The actor owns a cat with his own personality, much to Chet's dismay.

Setting: “The Valley.” Never specifically identified but obviously a desert community in the southwestern US, like Arizona or New Mexico. The descriptions were good, I was able to picture every scene without it being over-described.

Overall: This is a really fun series.

Posted by Dena Pawling at 7:06 AM No comments: 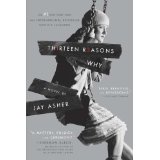 
Description: Clay Jensen, the protagonist, comes home from school one day to find a box of audio tapes on his porch. They are recorded by a classmate, Hannah Baker, who died two weeks prior. The tapes tell about her life, the parts played by thirteen people, and why she decided to kill herself.

Plot: The book enfolds mostly over a 24 hour period. Clay listens to the tapes and learns why he and twelve other people contributed to the suicide of Hannah Baker.

Characterization: The characters are well developed and sound just like high school students.

Setting: A small town, not specifically named [that I noticed] but the theater was called Crestmont Theater. Most of the book takes place in one night at various locations throughout the town.

Other: This was an emotional read. Not what I usually enjoy reading, but I did like this book.

Overall: The way the book was organized was really unusual. Hannah “talking” on the tapes was printed in italics, and Clay's response and what he was doing were in regular type. The book alternated, sometimes as often as every other line, between Hannah on the tapes and Clay's immediate response. In the E-book version I read, there were no paragraph breaks or indentations. All lines were flush left. But it worked.

Posted by Dena Pawling at 5:34 AM No comments: