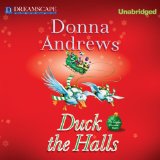 Description: The week before Christmas, someone is playing pranks on the churches [most denominations are included] of a small Virginia town, including placing a cage of skunks in the choir loft of one and several hundred ducks in the main sanctuary of another. Meg Langslow, the protagonist, has the task of helping all of the churches find alternate space to hold all their pre-Christmas activities. After a small fire at one church, someone is found murdered.

Plot: The main plot starts with Meg scheduling a church's activities at other churches' facilities, because the first prank leaves skunk stench permeating the entire church. All the churches in this small town are accommodating to their needy neighbors. As the number of churches “out of commission” grows, Megs job of creating the master schedule becomes complicated. Then after one prank, a fire in the basement of a church, the plot changes because a church elder is found dead near the fire. Meg doesn't necessarily “investigate” the murder, but in her efforts to schedule everything, she talks to lots of people regarding the pranks and the murder.

Characterization: The characters are reasonably developed and had their own personalities. Meg, the main character, might be a little “too good” in that she doesn't really have negative character traits. In fact, many of the people in the story are somewhat two-dimensional in that respect. Meg has 4yo twin sons. Each boy has his own personality, which was nice to see, but their language development was much younger than most of the 4yo boys I know. In fact, I was expecting a sub-plot on speech therapy. I would guess the boys had the speech skills of 2-1/2 to 3yo boys. Once I pictured them as early 3yo, their speech and roles became more believable.

Setting: Small town in Virginia. The descriptions were good, I was able to picture every scene. Some scenes were a tad over-described.

Other: The narrator was a good match for Meg's character. A good person, mild, easy-to-get-along-with. This book taught me what a “slow moving” story was like. Lots of description, possibly too much. Meg had quite a bit of interior thought throughout the story, which slowed it down a bit. At several points I almost stopped reading because there wasn't much action on the page. Some humor. Some of the chapter breaks were in strange places, like right in the middle of conversations but the end of one chapter didn't seem like a cliff-hanger, so it seemed odd to break the chapter there. Almost like “here's 12 pages, time for a new chapter” randomness.

Overall: A good holiday mystery, somewhat slow paced. I would read more by this author, but anything slower than this story I might stop reading.